In Greek mythology, Gaia is the ancestral mother of all life: the primal Mother Earth goddess.

The Gaia hypothesis was co-developed by a notable chemist, James Lovelock and the microbiologist Lynn Margulis in the 1970s.

The Gaia hypothesis argues that the organic and inorganic components of Planet Earth have ​evolved together as a single living, self-regulating system.

It suggests that this living system automatically controls global temperature, atmospheric content, ocean salinity, and ​other factors, that maintains its own existence and life on our planet. In a phrase, “Life maintains conditions ​suitable for its own survival.”

In this respect, the living system of Earth can be thought to be similar to the workings of an individual organism that regulates body temperature, ​blood salinity, etc.

As a guideline to the stories this is a crude timeline of Earth’s history from 4,500 million (4.5 Billion) years ago until today. 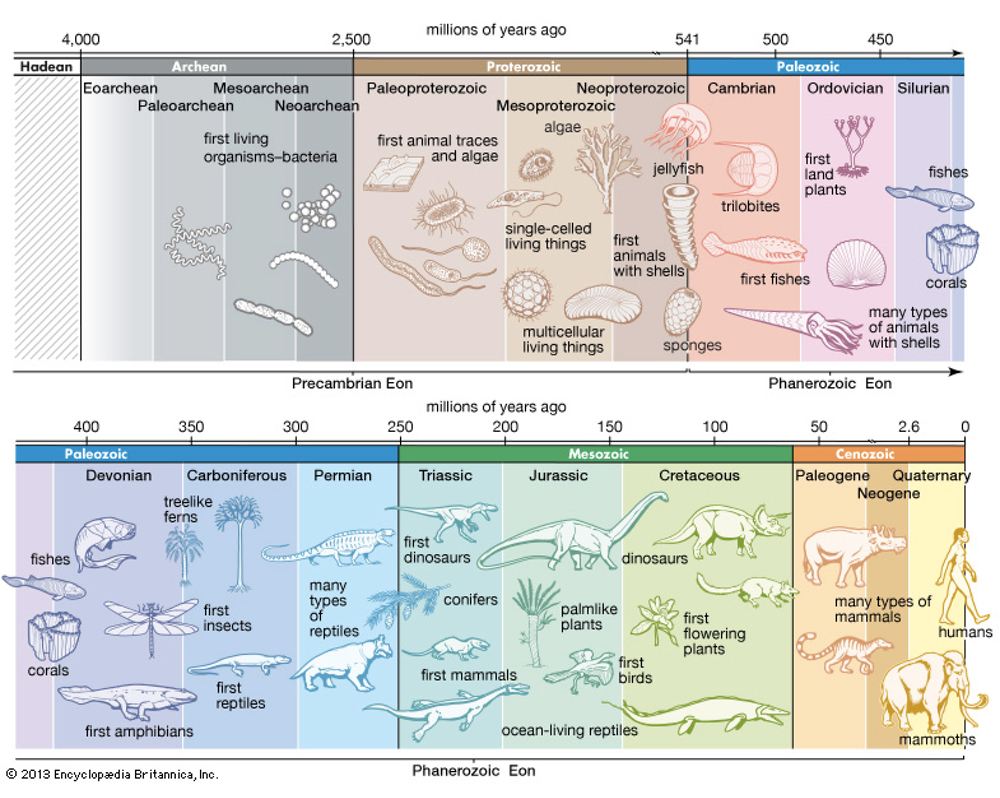 Story One – The atmosphere

The atmosphere of the Earth has over the last million years maintained an Oxygen level of 20.3-21%. The lower percentage was determined by analysing ice cores extracted in the Antarctic and Greenland which were formed over 800,000 years ago.

Oxygen is recognised as a very reactive gas, it will react with Nitrogen and Methane over time. There has always been lots of Nitrogen and small amounts of Methane in the atmosphere.

If you increase the percentage of O2 to 25% and light a match it would start a fire that you would have difficulty extinguishing. Reduce the level to 12% and life as we know it, would very difficult (12% is the O2 level on our tallest mountains). How has the planet maintained these levels over a million years?

CO2 levels are rising. There is evidence that this started soon after the industrial revolution in Britain in the 18th Century and has continued to do so in subsequent centuries. There is possible evidence that this rise will cause a ‘greening’ of the environment as CO2 becomes more available for the Earth’s plant life. We know that plant life breathes in CO2 and exhales O2.

There is also evidence that the oceans provide a ‘sink’ for CO2 where they form carbonates. So do we have to worry about the increasing amounts of CO2 in the atmosphere?

An interesting story. Go back millions of years and we have the first living things beginning to populate the land. Fossil evidence indicated these were mosses. They had no challengers, there were no animals, no other plants. They spread, and they spread.  There were so many of them that the CO2 levels in the atmosphere were destroyed … no greenhouse effect, the Earth’s heat escaped. The result was the Earth’s first ice age. Almost all the mosses died. Other living entities that breathed in O2 and exhaled CO2 occupied the land.

Trees like the moss in the above story are a major sink for CO2, plant life ‘breathes in’ CO2, uses it to grow and exhales O2. Deforestation would therefore have a negative impact on the environment. Eventually when trees die the carbon they are made of becomes CO2. Growing a lawn does not necessarily have a negative CO2 effect …any idea why?

So are the above phenomena just feedback loops or are they a deliberate intervention by a living planet?

The average temperature of the Earth has been maintained between 10 and 200C for billions of years while the Sun’s output has increased 10-20% over the same period. With 2017 coming to its end it has been noted by NASA that this has been the hottest year on modern records. 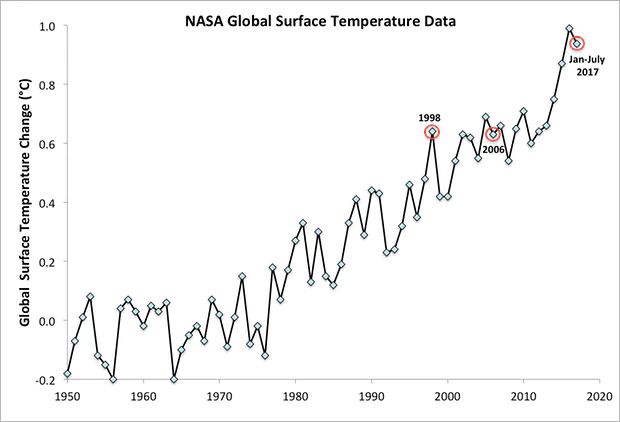 However there have been in the last 650,000 years seven cycles of glacial advance and retreat, with the abrupt end of the last ice age about 7,000 years ago marking the beginning of the modern climate era — and of human civilization. Life has survived all of these external disturbances. Look at this latest NASA video

Where can the heat hide? The main reservoir for any excess heat are the Earth’s oceans. The oceans are also a major source of cloud formation.

Clouds are sometimes underestimated in terms of thinking about global warming, however clouds are  a tremendously important part of our environment.They can support the greenhouse effect – probably more so than CO2. But they can also counteract global warming by the way in which they move water around and act as reflective shields of the Sun’s energy.

Recent hurricane activity in the Pacific (September 2016, 2017) was caused by water movement. Incredible amounts of water, from the warm oceans of the equator, evaporated into the atmosphere, forming clouds, this process leads to the cooling of the ocean and a greatly disturbed very energetic atmosphere  as the evaporated water vapour condenses to water which then distributes its energy over the nearby environment in the form of a hurricane.  Gaston Harvey and Irma being the latest. There is also a lot of absorption of CO2 in the disturbed sea.

Clouds can also be formed by other means, organic vapours released by organisms such as trees, and livestock appear to play a far more important role in cloud formation than has been suspected.

It could be argued that hurricanes and associated weather conditions are a way in which Gaia is trying to negate the effects of global warming or again are they just feedback loops?

Somehow the salinity (salt content) of Earth’s oceans has been maintained over the last 300 million years. How do we know this? The building blocks of living things, the cells that they and we are made of, cannot survive beyond levels of 6% salt content. However life has survived. There is also evidence from ice samples ( the ones in Antarctica go back to ice created almost 1 million years ago) that salinity levels have remained the same.

We know that the salinity of the blood of whales, mice, humans and most fish, whether dwelling in the sea, on land or in fresh water are the same. So how have the oceans maintained a constant salinity level while millions of tonnes of salts are dumped in them all year round, via rivers, earthquakes, and other natural events?

There is sometimes a complacency in our views on the nature of our oceans. They support the growth of a greater biomass (animals and plant life) than that of the land based environments. There are therefore some thoughts that the biomass contributes in some way to maintaining salinity levels by incorporating salt in their skeletal structures which then become part of the sediment of our oceans.

There are also ideas on ocean ‘cracks’ recirculating sea water and removing excess salt. Another model is CO2  absorption in sea water which reacts with excess salt and deposits insoluble carbonates.

Life was first thought to have emerged on planet Earth about 4 billion years ago. Since that time life in it’s variety of forms has continued to survive and evolve, despite dramatic changes in the environment of our planet. At times some forms of life have been extinguished  (dinosaurs are one of many examples – there is one surviving, living, dinosaur that we probably see every day – any idea?) but other forms of life have survived and new ones have developed.  The argument for Gaia is that it is the ‘living’ planet that has provided the conditions for this survival. An alternative argument is that by some lucky event the planet has an environment that can adapt itself to changing circumstances via a variety of feedback loops. But why didn’t that occur on Mars?

Do you think that a living, life supporting, Gaia which reacts to changing environment so life is preserved is a realistic possibility?

Maybe you are a bit like me. I’m sceptical. That is why it’s presented as a Hypothesis. However do we know everything about how the world works? The following research made me think again.

An interesting story – there has been recent research that shows that plants can communicate with each other. They are thought to do this via a fungal network. While mushrooms might be the most familiar part of a fungus, most of their bodies are made up of a mass of thin threads, known as a mycelium. We now know that these threads act as a kind of underground internet, linking the roots of different plants. That tree in your garden is probably hooked up to a bush several metres away, thanks to mycelia. So maybe the planet is more ‘living’ than we think.

If the above can happen maybe Gaia does exist?

Or do you still think that what happens to the the atmosphere, temperature, salinity and other environmental features mentioned in the stories is just the result of a series of feedback loops?

What is your hypothesis?

Thank you for reading. I hope that it has provoked some thinking. It provoked my thinking. I welcome comments.

Comments from both age ranges